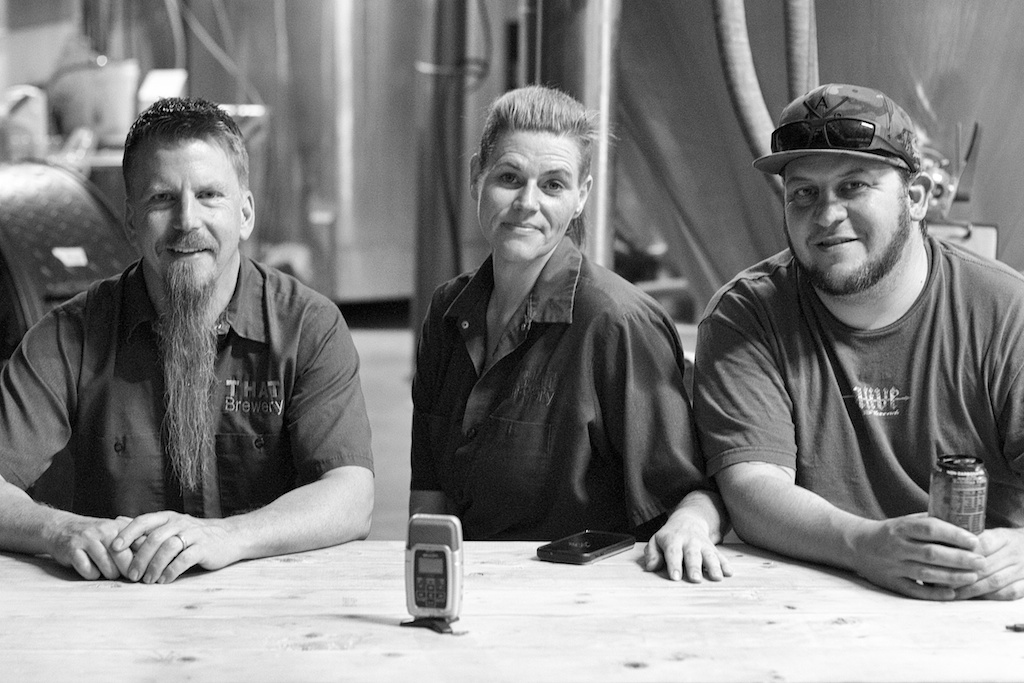 For our second THATcast episode I loaded the sound studio (well really it’s a small portable recorder) into the truck and drove down that scenic highway 260 from the Rim to visit THAT Brewery production facility in Cottonwood.

You can find all episodes and information on how to subscribe to our new podcast at https://thatbrewery.com/podcasts/.

It’s well worth the visit. From the outside, it looks like a typical industrial park building.

But once inside, you will find a bustling, sometimes noisy working production line for THAT beer.

Even if you are not into machines and tanks, you can find plenty to enjoy in the front tasting room. That’s where I sat for this conversation with brewers Steve and John (Misty was busy loading and unloading supplies). It might be a bit noisy in the background, but that’s what it’s like inside a brewery.

In our conversation we learned where Steve and John got interested in, and learned how to, brew craft beer. While Steve has been at it a long while, starting as a home brewer, John is relatively new to crafting beer, but brings a wealth of expertise from his experience in wine-making.

You will find that effect soon in the new beers John has been developing that are aging in wine barrels.

Some of the new experiments happening at THAT Brewery

There is THAT beer in those barrels.

Barrels and Kegs of THAT Beer

Aging beer in wine barrels at THAT Brewery in Cottonwood

I found maybe most fascinating the canning line, which the day I visited, was filling cans with Arizona Trail Ale. If it’s one thing I learned to appreciate, it’s that while a lot of this is automated, there are human hands at work stacking, packing, checking every can that goes by.

Checking the can supply

Sometimes they need a nudge

Each can full of beer

Can tops pressed on

Fresh off the line

Pressing the holders on

In addition to the Arizona Trail Ale, among the other brews available in cans at various Arizona locations are THAT Strawberry Blonde and the Roadrash IPA. We learned from Steve that very soon you will be able to buy the Fossil Creek IPA in cans too, as soon as they can design the beautiful art that will enclose the cans.

If you have seen the design of THAT Brewery’s cans, you know that they consider the outer art as important as the art that goes into crafting the beers.

I really enjoyed learning from John and Steve about their approach to beer making; they are both serious and have fun at the same time. If you visit THAT’s facility in Cottonwood, you will find that everyone there is eager to share and teach about the craft of beer making there.

Overdue on THAT Updates

What's on tap at THAT Brewery? Well, beer of course. We are a brewery after…

Who’s That Blonde on the Can?