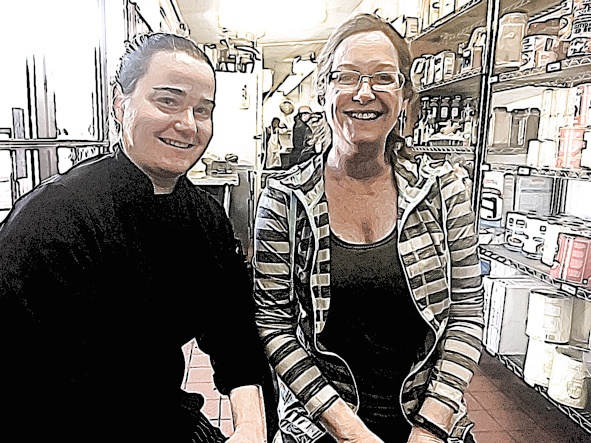 For this podcast I sat down in the kitchen of THAT Brewery and Pub in Pine with Tamara and Chef Val to talk about… food! And beer.

You might hear pots and pans clanging, maybe the freezer door opening as the staff was doing their prep work for a Wednesday.

Tamara shared the success of this year’s Octoberfest, the 14th annual one. Some 200-300 attendees enjoyed Chef Val’s authentic German food. The schnitzel sold out quickly, and people also tasted Bavarian pretzels dipped in beer cheese, freshly made sauerkraut, and… pork knuckles braised in beer. Beyond reggae music and games, the event also raised over $11oo for the Dueker Ranch in Star Valley.

We also rolled out THAT’s first Hefeweizen and the Dopplesticke returned. Both should be available n both Pine and Cottonwood into November, although someone suggested an effort to be made to keep the Hefeweizen on tap year round. Feel free to lobby your THAT beertenders with requests.

THAT Strawberry Blonde continues to be a top seller in Phoenix and there will be a big rollout of THAT beers this month in Yuma. The Arizona Trail Ale continues to be a favorite, and keep ordering it as 5% of all sales support the Arizona Trail. Tamara also reports that the Fossil Creek IPA is “kicking it out of the park” in popularity. You can expect to see it in cans sold at the places you can already buy THAT beer.

Chef Val, who was born in Phoenix, took over the kitchen in June. She’s enjoyed networking with regional farmers and suppliers, and has been sourcing local produce as well as from hydroponic farms in Phoenix. She has an interest in bringing more fresh ingredients to the menu.

She’s introduced pizza specials on Thursdays, such as one featuring local sausage and caramelized onions as well as a marinara pie with sauce from local tomatoes.

Her cooking was a huge hit at the Friday dinner for last month’s Fire on the Rim Mountain Bike Race including ziti and eggplant parmesan. She’s heard many requests for the ziti, so look for it soon as Sunday specials. Look also in the future for a “black and blue” salad as well as a changing featured protein of the week.

Some time in January, Val will be putting her experience cooking in Hawaii to work for a luau style pig roast.

And Val is introducing a new dessert, a Mud Stout Mousse (made from THAT Monsoon Mud Stout) with chocolate, served in a small beer mug glass with whipped cream topping designed to look like a head of beer.

It sounds like Val is enjoying living in Rim Country, which she describes as having “a community vibe you would not know without living here.” She enjoys hiking and exploring fresh foods at the Farmers Market in Payson.

And we want to offer a shout out to THAT friend and loyal customer, Jerry Brock, who recorded the new backing music track for our podcast. He recorded and included the sounds of the canning line from the Cottonwood Brewery… listed for the sounds of lids being pressed into place.

Remember you can subscribe to our episodes in your favorite podcast app and also via iTunes.

It's time again for authentic german food, local Arizona wines, and THAT Craft beers for…